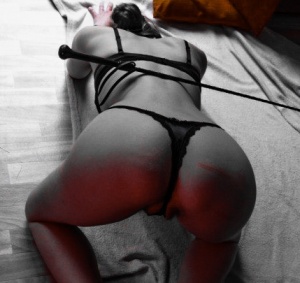 She waited naked on the cold kitchen floor facing the back door, she was on her knees bent over so that her forehead touched the floor and her palms rested either side of her face, her feet together but her knees apart.

Eventually the door opened and he waked in, he wasn’t alone, she watched out of the corner of her eye as Master’s and five other pairs of muddy boots walked passed her. She recognised the boots of two of Master’s friends but the others were strangers to her.

She stayed where she was until her Master broke the conversation he was having to shout “Beers” at her. She rose gracefully and retrieved six beers from the fridge and opened them. Starting with her Master she approached each man with her head and eyes down a presented him with a beer resting on the palm of her outstretched hand and held gently by a finger and thumb of her other hand.

Only moving her hips she began to grind her pussy into his dirty boot, the men’s conversations died down as she began to moan for their benefit. The men circled her, looking down at her and then each of them spat on her face, all except Master. It didn’t take long, she was well trained and always ready, and as their saliva ran down her face her body quivered in orgasm.

The men kicked off their boots and moved into the other room to watch the game, leaving her with an order to clean their boots. As she thoroughly cleaned the boots, her tongue raw and her mouth full of the taste of dirt, she wondered what Mistress and the other men’s girlfriends would do with her when they returned and the drinks began to flow.