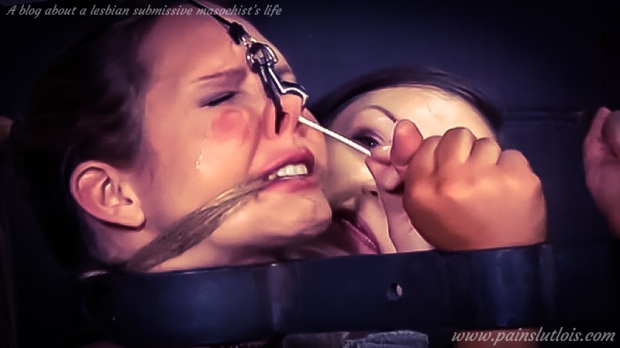 Yesterday afternoon I received a text message from Lois containing a link to a video of a restrained girl having wasabi put inside her nostrils, the rest of the video is basically her suffering whilst being taunted by the dominant girl who did it to her.

I sometimes wonder what possesses subs, and in particular Lois, to send me things of this nature. Is it not obvious that my first thought is going to be that she is suggesting I do the same to her? And if that is so would that not be considered topping from the bottom?

Lois claimed, after the fact, that she definitely had not been suggesting I do this to her and only sent it because she thought I would enjoy it. Either way, I told her to purchase some wasabi on the way home from work.

In researching this after the fact I’ve discovered that wasabi reacts with the mucus in your nasal passages rather than with your tongue and it is quite a severe reaction. Neither I nor Lois like it so neither of us have had much interaction with it but the burning in your nose even when you just smell it is noticeable.

When she arrived home I changed her day collar for her leather one and then sent her to get changed and whilst she was gone I retrieved some items to restrain her. She arrived back a few minutes later wearing a blue vest top and some jeans that her ass looks particularly fetching in.

After getting her wrists cuffed I used a carabiner to fasten her wrists to a high up cupboard door in the kitchen, then I strapped her favourite ball gag in her mouth as I expected her to be quite vocal about this. Just before the gag went in she looked at me and said “please don’t” and her faced told me she genuinely didn’t want to do this so after inserting the gag and strapping it shut I kissed her head and said “do it for me?” and she nodded.

The effect of the wasabi was quite immediate, I didn’t even put much in each nostril but her eyes were instantly wide and she started making a strange noise through her gag. Similarly to in the video (which you can find by search for (Rain DeGrey wasabi by the way) she started to flap her hands around although she couldn’t move them much. Her cheeks started to go pink and her eyes started to tear up and then when she screwed them shut the tears ran down her cheeks.

This is not an enjoyable sort of pain despite my pussy’s betrayal! I think I was wet because I was being forced to endure it rather than because of the pain but really who knows what goes on in my crazy brain!

That stuff is horrible to eat and much much worse to have up your nose, it burns all the way up into your nasal passage and stings your eyes, it’s a horrible sensation. All I wanted was to get it out of my nose but I was completely hopeless to achieve that.

I could also taste the disgusting stuff for over an hour afterwards and it completely ruined the nice pasta that I made for us. However I did thank Mistress for putting me through this trial as everything she has me do makes me stronger and a better sub.

I watched her intently for about ten minutes as she switched between almost hanging from her cuffs and drooling on the floor to flailing around and trying to blow her nose clear. It was almost as if the burning was coming in almost unbearable waves.

Eventually I took pity on her and let her down but before I did I reached down the front of her jeans, predictably she was very wet.

She looked a bit of a mess when I let her down, tears, snot and makeup streaked her face and she’d drooled all over herself but I still pulled her into me, held her tight and told her how amazing she is before sending her to clean herself up, I also needed to change my top!