Firstly, I changed the theme on here again, no real reason other than I get bored and fancy a change every now and again, hope you like it!

Months ago, I added a list of fantasies to this blog that I was hoping to make a reality with the help of my friend Luke and I actually knocked one off the list fairly swiftly just before Christmas, however it turns out six months has passed since then and I haven’t gotten any further!

This is much to the frustration of Luke who has put quite a lot of effort into trying to organise things only for me to be busy, out of the country or just generally unhelpful. I’m sorry Luke, life has been a challenge of late and I’ve been on a bit of a roller coaster emotionally through various different things that have happened. I think basically I have lost myself a bit.

I’ve been single since I broke up with Kayleigh which means I’ve been single for 1258 days which breaks down to nearly three and a half years, now that is depressing! You know how they say time heals all wounds, it’s not true. I’ve been in love before and I’ve had long term relationships before and in the scheme of things I wasn’t even with Kayleigh that long but I’m still not over her, not properly.

Partially this is probably due to the fact that she has never completely left my life, despite us not being together and despite the fact I know she has been in at least one relationship since me, she still pops back into my life every now and again to fuck with my head and put me back to square one. The last time was at the end of last year when she “popped round” to catch up, we were literally just having coffee together but she ended up removing my top tying my arms up behind me and making me eat her pussy. Once she came she left, with my arms still tied. I thought she was joking but after a couple of hours I realised she wasn’t coming back and I’d have to escape the rope myself, which took another couple of hours.

Hannah says she is toxic for me and I should keep her out of my life forever but there is part of me that knows that if she comes calling again I’ll let her do the same thing to me again. She might be toxic but so are alcohol and drugs and people get addicted to those right?

So anyway, I’ve wildly digressed from what I intended this post to be about but suffice to say I’m still quite fucked up over Kayleigh because I think I’m still in love with her and the “concentrating on work” for the past three years has just been my way of trying to deal with it and waiting for her to realise that she still loves me too.

The actual point of this post is that I enjoyed my little play session with the homeless guy so much that it got me back interested in knocking some of these fantasies off the list. I contacted Luke and we got some things arranged and I’m quite excited.

Next Saturday night I am staying at a (very cheap) hotel about an hours drive from where I live. I will have instructions on what to do once I arrive but it will include me blindfolding myself and waiting to submit to an entire night of whatever the person Luke has arranged wants. I don’t have all the details yet but it is definitely happening on Saturday and it will definitely be someone I have never met before (and never will meet).

I go on holiday for a few days the following week and then at the beginning of July there is large a BDSM party being arranged by an acquaintance of Luke’s and as long as he can organise it I am going to fulfil my fantasy of being an ornament at that party. He hasn’t told me all the details of his plan but the main part of it is that I will be put inside a full body plaster cast for twenty four hours with complete audio and visual sensory deprivation. This sounds horrifically scary and extremely exciting both at the same time. 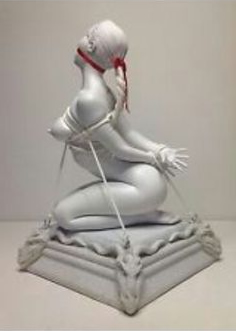 I know a few people are really interested in the auction fantasy, that was coming along nicely, arrangements were being made and then I screwed it up by being away for a few weeks and now I don’t know when we’ll be able to remake the arrangements. A few people suggested that there be multiple goes at this and that several people could pay to have me for a week at a time. There is a word for that, prostitution. Whilst I have nothing at all against prostitutes I am not one and Luke isn’t a pimp so that won’t be happening, sorry!

Thank you to those who commented on my previous posts, I really enjoy receiving comments and I always try to answer them, especially if they include questions. I’m really grateful to you for reading my blog and hope you enjoy it, if you do please share it with people who might also be interested on twitter or tumblr or whatever.

For those that don’t know, I also have a Tumblr blog which I update MUCH more often than this one. Mainly I reblog things that I enjoy and answer questions people ask me. If you are interested you can find the blog here.