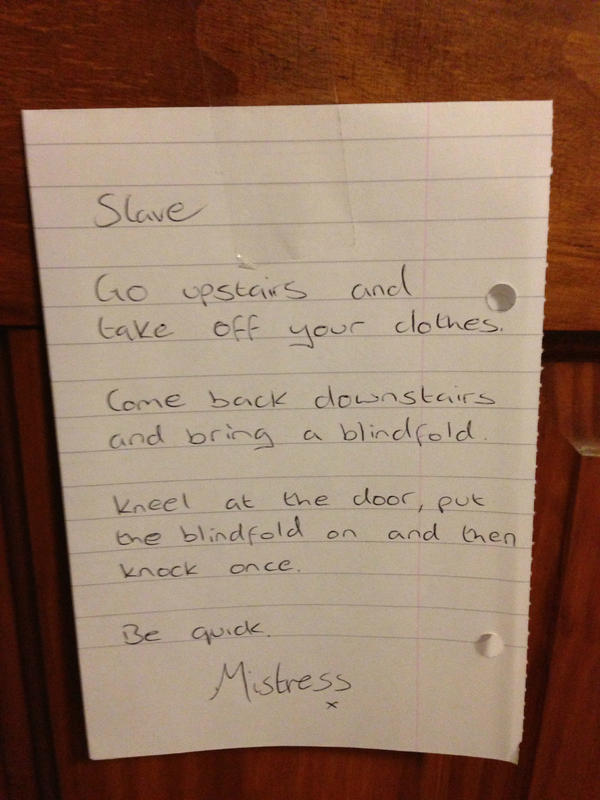 As those who follow me on Twitter may already have seen, I had a note waiting for me on the lounge door when I got home last Wednesday night. I read the note whilst listening to the person (people?) inside the room trying to be quite an for good measure I took a photo and tweeted it before heading upstairs as instructed in the note.

Removing my clothes took no time as all but I wanted to look good for my Mistress so I had a quick wash and then put some smoky black eye makeup on as quickly as I could, then I grabbed a black velvet blindfold from my box and went back down.

I knelt in front of the door, spread my knees a little and then put the blindfold on casting me into completely blackness, it is a very good blindfold. Then I knocked once on the door and quickly folded my arms behind my back in the way that Mistress likes, pushing my shoulders back and my breasts out.

Seconds later I heard the door open and then Mistress was next to me, I could smell Her scent and it immediately made me wet. She gently put my collar around my neck and then moved my freshly dyed blonde hair and fastened, then padlocked it at the back.

She moved back in front of me and roughly grabbed my nipple and said “Up”, She pulled on my pinched nipple as I got to my feet keeping my arms crossed behind my back and then I followed Her as she led me by the nipple into the room.

I could sense that there was at least one other person there and suddenly felt very self conscious of my nakedness, I’m pretty sure I was blushing. Mistress took me across the room by my increasingly sore nipple and then told me to stop and kneel. When I knelt down I could tell that there was someone else very close in front of me, and they didn’t smell like Mistress although I could tell they were female.

I heard someone leaving the room and then I felt a hand cup my right breast, a rough big hand, a mans hand. He gave my tit a squeeze and then pinched my nipple then did the same to the other one, then his hand went between my legs and I had to widen them a little to allow his large hand between them. I gasped as he twisted my tag, presumably to read it, and then he pushed a finger inside me.

The guy spoke next, he said “OK, both of you kneel up” and when I obeyed I could sense the other person almost touching me they were so close. I sensed Mistress behind me just before She placed her hands either side of my head and gently tilted it left and pushed it forward, when my lips touched the ball gag I instinctively opened my mouth and took the ball into it.

This was apparently no ordinary ball gag though, as it slipped into my mouth my lips touched skin, I would have flinched away in surprise but Mistress held my head firm until She was sure I wouldn’t move and then buckled the gag around my head and locked it with a padlock.

I tried to move but I there was resistance from the gag when I did, I realised that the other girl was attached to the same gag somehow! We both instinctively tried to pull away but we couldn’t and we ended up almost falling over until Mistress and the Dom caught us and told us to stay still. It was good advice!

After a couple of minutes we managed to stay knelt up without assistance although it wasn’t very comfortable! Then Mistress and the Dom were there again, one on each side of us, Mistress pinch my left nipple and then applied a strong clamp to it, then simultaneously she tugged on the clamp and the Dom pinched my right nipple before attaching a clamp to that too. It took me all of five seconds to work out that painful clamps on my nips were attached to something similar on the other girls.

I could feel some drool start to form around my mouth by this point but I had no idea if it was mine or hers, or a mixture of both! They left us for at least 15 minutes, they were still in the room but they didn’t talk, I think they were just watching us as we tried to keep still. Every now and again one of us would sway a bit and pull on the others nipples which would cause us to wobble more and yank on each others mouth and nips until we got steady again. I’m sure it was very amusing to watch but my jaw was aching and my nipples were in agony!

Mistress spoke first, it was a simple order, walk backwards on your knees until you’re bent over. It was directed at both of us and I for one knew what it was intended to achieve.

I started to slowly move my knees backwards, one at a time and only an inch or so at a time. It didn’t take long for my and presumably the other girls nipples to be stretched out as far as they would go, the clamps were somewhat reluctant to let go of either of us and we were bent at around 45 degrees by the time I felt the left clamp start to move and then all of a sudden it pulled right off pinching all along my nipple as it went, it was an amazing pain that brought tears to my eyes and I loved it!

The second clamp pinged off my other nipple less than minute later leaving both of them burning in ageing and leaving the other girl with the clamps hanging from her tortured tits. We weren’t finished though, it took all of my strength not to fall over as the gag and our mouths took the strain of our new position. With our hands cuffed behind us we ended up in a doggy position but only held up by our knees and the gag.

It was an extremely uncomfortable position but we managed to maintain it and received a round of applause for our efforts.

I totally wasn’t expecting it when I heard a loud slap and the girl jolted into me and almost made us fall over, then I FELT a slap as a paddle hit my exposed ass and it was my turn to fall agains her. This continued for a further nineteen hits each by with time my ass was on fire, my pussy was soaking and there must have been a pool of our drool on the floor!

We were left alone for a little bit then, not long, just enough to get our composure back and then I sensed someone behind me again, then I felt the other girl start a little and knew we must be about to get the sane treatment.

I was covered in sweat and when Mistress pulled out of me I couldn’t hold myself up anymore, I collapsed onto my side bringing the other girl with me, the dominant s left us there.

A few minutes later I heard the clink of wine glasses and then I listened to Mistress and the Dom talking for nearly an hour whilst we continued to drool and juices that had coated my thighs dried.

Eventually Mistress got up and unlocked the gag, then unbuckled it and helped me release it from my severely aching jaw, then She told to kneel and I did so as best I could with my wrists still cuffed.

I listened as they both helped the other girl up, then she screamed like crazy when they obviously removed the clamps that I’d forgotten were still on her nipples! Eventually she was sorted out and they left.

When Mistress came back from seeing them out She removed my blindfold, it took a while for my eyes to adjust to the bright lights in the room. It looked completely normal except for the ball gag on the table and a wet patch on the floor.

She clipped a dog lead onto my collar and lead me to the bedroom where I thoroughly thanked Her for my earlier orgasms using only my tongue and my considerable skills with it!

I didn’t get my arms free until the next morning by which time my arms were aching badly, I thanked Her again when She released them, this time with my hands too.

I have asked Mistress who the people were but She will only say that they are “just some people I know”, I haven’t pushed Her on it though because She told me there was a video of the two of us and if I was “a good girl” I might get to see it.

Has anyone ever seen a gag like that? I found the picture on eBay, it is a really fun device, one day I hope to meet the girl that I spent all night kissing!

18 thoughts on “A long kiss goodnight”