They say admitting it is the first step so I guess for me this is the perfect forum to start. My name is Lois and I am a coke addict. Fortunately for me, coke (the drink not the drug!) is the perfect hangover cure! it still took me half a day but I am finally feeling human again after my birthday celebrations last night! Human enough to type anyway, I’m still not ready to get dressed!

So as you may have guessed it was a fairly big night, lots of fun and lots of (far too much) drinking going on in Cambridge, I’m just glad I’m not one of the people who didn’t take today off work, like Kayleigh! She says she is dying at work but I’m hoping she is just being dramatic!

So I guess I should start at the beginning, the beginning being about 4pm yesterday afternoon, it seems so long ago now!  I left the house dressed in a black skirt and purple top over some purple lingerie, I hadn’t been told what to wear and had decided to make sure I looked presentable all over, I’d spent some time ensuring I was clean head to toe beforehand.

I arrived at Kayleigh’s work at about 4.45 and called her from the car park, I knew that her works friends know about me and her, she had told them before she even knew that it would be an issue for me, and I was too nervous of going up. Unfortunately for me she wasn’t quite finished and told me to come up and see her.

They have a fairly open plan office so I could see her as soon as I went in but I told the girl at the front desk who I was there to see, she asked me what it was regarding and I blushed and rather awkwardly said I was her “partner”! I felt like an idiot! Anyway she called Kayleigh who told her to send me over.

She was grinning like a Cheshire cat when I arrived at her desk, she said “Partner?” and I just smirked while she laughed at me. What was I supposed to say? “Girlfriend”? We’re not at school!!

Anyway, I waited for her to finish working (I’m not convinced she had any actual work to do) and various people kept walking past on their way out. As they went passed Kayleigh would say “Good night Emma (or whoever), this is my girlfriend Lois by the way, it’s her birthday.” which meant I had to say hello and say thanks when they wished me happy birthday. I just kept giving her looks that said “pleeeease can we just go” but she was having too much fun. A couple of the people were obviously friends of hers because instead of “this is girlfriend” she said “this is my ‘paaartner'” and actually did the quotes with her fingers, I could have killed her but it was actually quite funny and in actual fact it made me feel a lot better about telling my friends because no one really seemed to care about the whole lesbian thing!

So after I hung around outside the bathrooms waiting for her and tweeting (see tweets in the top right) we headed back to the car. She was feeling very pleased with herself so I tried to play on her good mood to find out which piercing she had chosen but she was having none of it.

It was only a short drive to the piercing studio and once we’d found somewhere to park I followed her in to the shop a couple of steps behind hoping this would be enough of a show of submission.  Apparently it wasn’t though because as soon as we entered the shop she pointed at a seat and said, in a loud voice “sit there and don’t move”.

I was so embarrassed! I just sort of looked at the floor and sat in the seat she had indicated, there were other people waiting but I didn’t look at any of them despite the fact I could feel them looking at me.

Kayleigh talked to the girl at the counter for a little bit and they had a bit of a laugh (I was convinced they were laughing at me) and then a guy came out with tattoos all down both arms and stretched ear lobes containing plastic disks. He gave Kayleigh and hug and then she pointed at me and talked to him for a while, more laughing, and then he went back into his little room and she came and sat next to me.

She sat close to me and held my hand which helped to relax me a bit. I looked at her and asked if I got to know yet but she just smiled and shook her head.

We waited for quite a while, three people went in and out, emptying the shop, before be tattooed guy came out and gestured for us to come in. The room was fairly small and in it there was a chair that sort of resembled a gynaecologists chair with stirrups at bottom but these were folded away.

I must have looked worried because the guy, who introduced himself as Gavin, said “It’ll be fine, just have a seat and I sort yourself out and I’ll be right back”. I don’t know why I would look worried, getting pierced doesn’t worry it me it excites me, no matter where it is going!

Once he left the room Kayleigh told me to give her my underwear, I looked at her quizzically but she just said “All of it! Quickly!” so I slid my thong off and then unclipped my bra and pulled it out from my top. She motioned for me to sit in the chair and then grinned at me and produced a pair of handcuffs from her bag.

I had sorted of expected this from the hints she has been dropping the last few days but my heart still began to race. I watched her carefully, pouting as she moves my arms above my head and then cuffs them around a bar on the top of the chair, I give them a tug but they are secure. I know I’m starting to get wet when she pulls the blindfold out of her bag, it’s actually a pink and black eye mask for sleeping on a plane. She has the biggest grin on her face as she places it over my eyes and slides the elastic around the back of my head. Just before I hear Gavin come back in she pulls my top down and my skirt up and I’ve still no idea what I’m getting done!

My cheeks are burning when I hear Gavin laugh and say “You’re a mean one Kay”.

I hear a stool rolling on the floor and can sense him between my legs, he says “leave her alone, you aren’t helping” and then wipes my pussy with a towel, I’m mortified!  She let’s go of my nipple and laughs.

I can feel a coolness as he rubs it with alcohol or whatever and then he pinches different parts around my clit making me jump a little until he finds the right place and positions the clamp tool thing. Then he says “ok take a breath” and then wham, the needle goes through.

The sounds I make is more of a moan than a yelp, or maybe a combination of the two! He says “ok that’s the worst part over, I’m just going to put the jewellery in” but then Kayleigh says “wait wait wait” and I feel her fingers pulling at the skin around the piercing and then her phone makes the  taking a picture sound.

He puts the ring in and I feel him messing around as he sorts it out then he says “I’ll be outside when you’re ready, don’t be long I want to get off” and when I hear the door she immediately rips the blindfold off and her lips are on mine and her tongue is in my mouth.

When she finally stops kissing me she tells says “I’m gonna sit on your face when we get home” and then she uncuffs my wrists. She uses a small mirror to show me the piercing, it looks really pretty but we will have to wait a little while for it to heal before we can attach the tag which she produces from her bag to show me. It’s a round silver dog tag saying “Kayleigh’s Slut” on it, I smile at her happily.

I don’t get my underwear back but we are soon back in the car heading back to my flat to get ready for my birthday night out, I will right about how that went next time!

Today the piercing, which is a proper clitoral piercing not a hood piercing, feels amazing. My clit feels so sensitive, I haven’t been able to wear underwear today!  A few people said they wanted a picture of it, well don’t expect this to happen too often but here is the picture Kayleigh took directly after it was pierced: 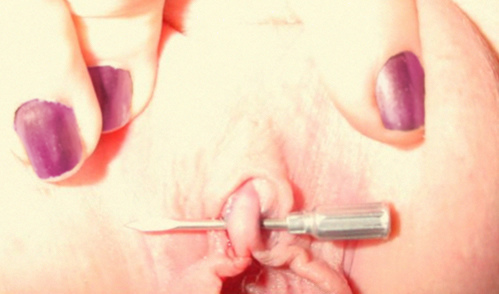 I apologise for the state of Kayleigh’s nails, she bites them. I fixed them before we went out! The picture is a bit bright because he had a big spotlight on me apparently!

Anyway, that’s all for now, I’m off to watch Avengers, without my underwear!

12 thoughts on “My Addiction”